The other day I was going through some of my old notes from years ago when I found this gem that I had written back in 2007 (almost 6 years ago):

“The following is the closest that I can come to proving the existence of God. It’s good enough for me.

That reasoning “proved” to me that God exists. In fact, it satisfied me enough that I was able to put the question of God’s existence from my mind for some months at least.

I don’t remember if it occurred to me or not that I was making an assertion based only on how the alternative would make me feel. If it did occur to me, I guess I never realized how fallacious such reasoning is. 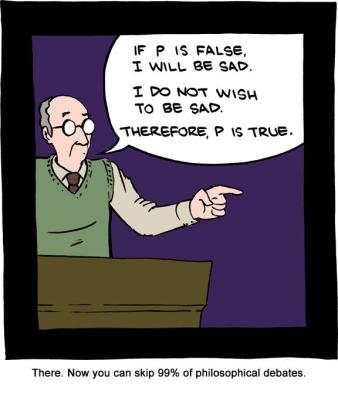 Perhaps deep down, I realized that this reasoning never actually proved anything about God, that it just made me feel a little better about unquestioningly accepting his existence. As time went on, I learned more about epistemology and the scientific method and it didn’t take me long to discard this reasoning as an embarrassment.

In the years since I wrote those words, I’ve found P to be false but luckily for me, I found “I will be sad” to be false too.

Just to be clear, there is a lot wrong with this kind of reasoning that I engaged in six years ago. The universe isn’t here just to make us happy and reality doesn’t magically reconfigure itself based on our emotions. The fact that you find a hypothesis to be emotionally inconceivable says nothing about the accuracy of that hypothesis.

15 thoughts on “God Exists Because the Alternative Sucks?”

This site uses Akismet to reduce spam. Learn how your comment data is processed.